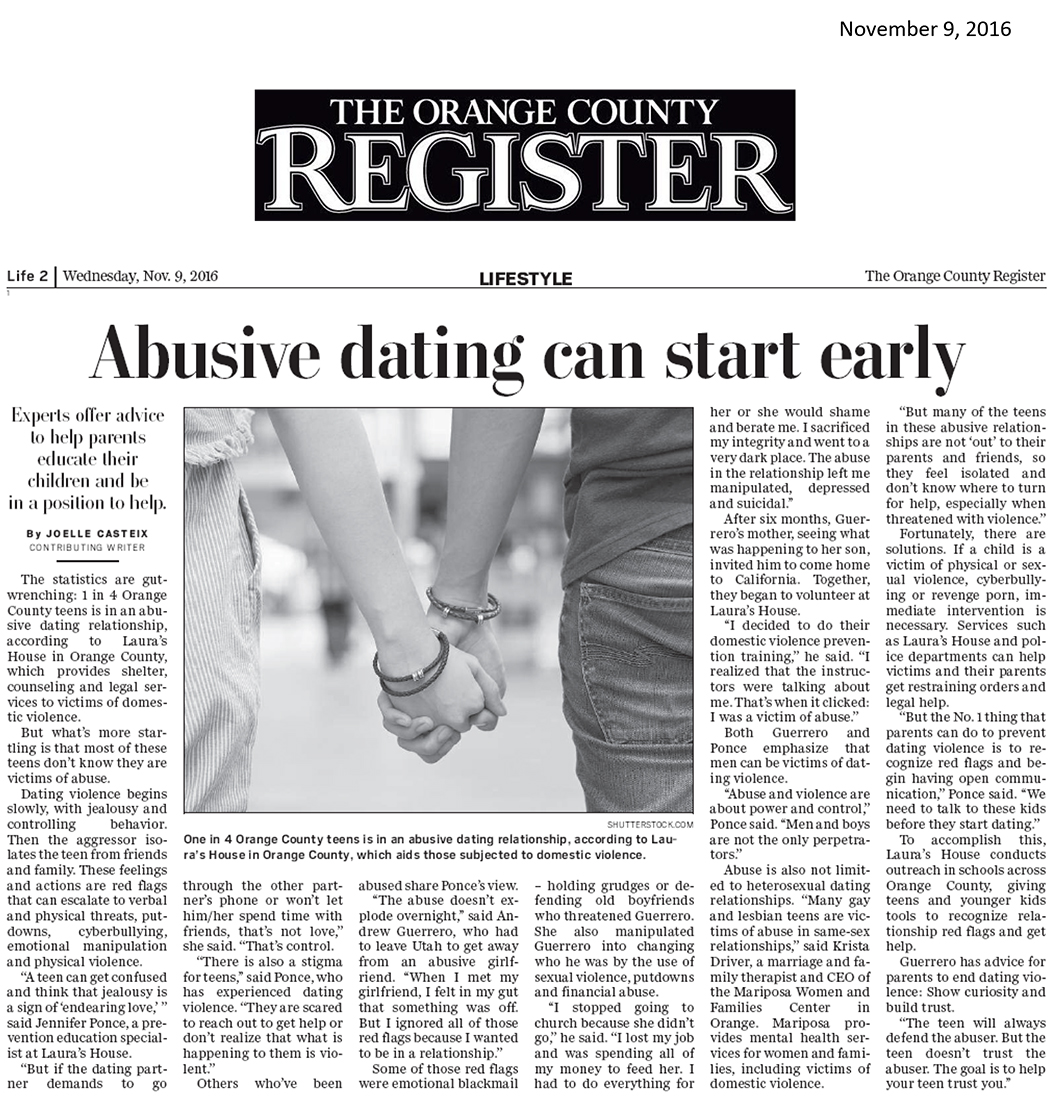 The statistics are gut-wrenching: 1 in 4 Orange County teens is in an abusive dating relationship, according to Laura’s House in Orange County, which provides shelter, counseling and legal services to victims of domestic violence.

But what’s more startling is that most of these teens don’t know they are victims of abuse.

Dating violence begins slowly, with jealousy and controlling behavior. Then the aggressor isolates the teen from friends and family. These feelings and actions are red flags that can escalate to verbal and physical threats, putdowns, cyberbullying, emotional manipulation and physical violence.

"A teen can get confused and think that jealousy is a sign of ‘endearing love,’" said Jennifer Ponce, a prevention education specialist at Laura's House.

"But if the dating partner demands to go through the other partner’s phone or won’t let him/her spend time with friends, that’s not love," she said." That’s control.

"There is also a stigma for teens," said Ponce, who has experienced dating violence. "They are scared to reach out to get help or don’t realize that what is happening to them is violent."

"The abuse doesn’t explode overnight," said Andrew Guerrero, who had to leave Utah to get away from an abusive girlfriend. "When I met my girlfriend, I felt in my gut that something was off. But I ignored all of those red flags because I wanted to be in a relationship."

Some of those red flags were emotional blackmail – holding grudges or defending old boyfriends who threatened Guerrero. She also manipulated Guerrero into changing who he was by the use of sexual violence, putdowns and financial abuse.

"I stopped going to church because she didn’t go," he said. "I lost my job and was spending all of my money to feed her. I had to do everything for her or she would shame and berate me. I sacrificed my integrity and went to a very dark place. The abuse in the relationship left me manipulated, depressed and suicidal."

After six months, Guerrero’s mother, seeing what was happening to her son, invited him to come home to California. Together, they began to volunteer at Laura’s House.

"I decided to do their domestic violence prevention training," he said. "I realized that the instructors were talking about me. That’s when it clicked: I was a victim of abuse."

Both Guerrero and Ponce emphasize that men can be victims of dating violence.

"Abuse and violence are about power and control," Ponce said. "Men and boys are not the only perpetrators."

Abuse is also not limited to heterosexual dating relationships. "Many gay and lesbian teens are victims of abuse in same-sex relationships," said Krista Driver, a marriage and family therapist and CEO of the Mariposa Women and Families Center in Orange. Mariposa provides mental health services for women and families, including victims of domestic violence.

"But many of the teens in these abusive relationships are not ‘out’ to their parents and friends, so they feel isolated and don’t know where to turn for help, especially when threatened with violence."

"But the No. 1 thing that parents can do to prevent dating violence is to recognize red flags and begin having open communication," Ponce said. "We need to talk to these kids before they start dating."

To accomplish this, Laura’s House conducts outreach in schools across Orange County, giving teens and younger kids tools to recognize relationship red flags and get help.

"The teen will always defend the abuser. But the teen doesn’t trust the abuser. The goal is to help your teen trust you."

Read the full article on OCRegister.com

Home for the Holidays? Or Shelter, Crisis and Fear? Featuring Adam Dodge We’ve all heard there is more domestic violence during the holidays, but is that really true? Is there more assault, more victimization, more seeking shelter because of this time of year? How does this season affect victims, survivors and their families?

TILLY’S LIFE CENTER AND LAURA’S HOUSE SELLS OUT THEIR FIRST ANNUAL FESTIVAL OF THE HEARTS EVENT More than 300 teens interacted and learned about creating healthy and positive relationships during the inaugural event ...

If you have questions or concerns about your relationship you can get help and answers now by contacting Laura’s House by phone or through Heart Chat.

Tell your friend that you are concerned or think they might be in an abusive relationship. Send them an anonymous e-postcard for free!

Take action and stand up against adolescent dating abuse by simply taking the Laura's House pledge to promote healthy relationships.

Red Flags and warning signs are present in the beginning of a relationship, even on the first date. Identify them, recognize them and act.

Changing social beliefs, attitudes and the behaviors that perpetuate domestic violence while creating a safe space in which to empower individuals and families affected by abuse.